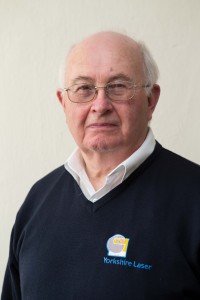 Garnett Orford is the driving force behind Yorkshire Laser having started the business  in the early 1990s. Originally from the West Midlands, Garnett moved back into engineering  after being made redundant from the Leeds printing business he ran for Robert Maxwell.

He vowed at the age of 55 never to work for anyone again and Yorkshire Laser and Fabrication was born with just two employees. Today it has 35 staff including his son, Matthew, who joined the company as a teenager and is now sales and technical director.

At 77, Garnett  still comes into the office and works most days. But he still manages to find time for his hobbies – bikes and music.  He’s been a keen motorcyclist since he was a teenager and now has a collection of bikes which he restores and rides. He and Matthew travel all over the country on their bikes . Garnett also sings in a male voice choir.