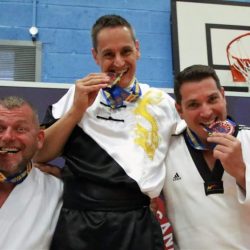 IT’S high kicks all round for Castleford’s Duncan Perry who’s on his way to his fourth WMO world championships after winning bronze in the European round of the karaté tournament.

This is the first time Duncan, who is the Assembly Foreman for Normanton-based leading engineering firm Yorkshire Laser and Fabrication, has won a medal at the World Martial Arts Organisation’s European Championships which were held in Rugby, Leicestershire.  He came third in the Veterans Traditional Weapons category against other over 45-year-olds.

“I’ve never felt as prepared for a competition as I did for the European Championships so I was glad to achieve what I set out to do,” said Duncan who trains every morning before work plus most evenings and weekends.

“I have qualified for the World Championships through the British Championships in the past, last competing two years ago in Torremolinos.  The Worlds, which this year take place in Portugal in September, are a step up from the European Championships with tough competition coming from the US, Canada and South Africa.”

Second Dan Black Belt Duncan took up karaté ten years ago.  He used to practice Kung Fu as a child and was prompted to return to martial arts by complications surrounding a medical operation which encouraged him to take stock of his life and rediscover activities he’d previously enjoyed.

He joined Castleford karaté club Zenku Kai and got together five years ago with his partner Tracy, a Fourth Dan Black Belt, who is his chief instructor.

“Karaté offers constant learning and self-improvement. The Black Belt levels go up to Ten Dan so I still have a way to go. I love it. It’s like having a massive family – everyone looks out for each other and if a competition doesn’t go your way, there’s always someone who is able to provide constructive analysis and advice.”