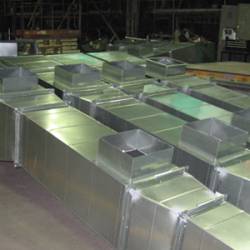 Here at Yorkshire Laser, we believe that sheet metal fabrication is one of the most indispensable and vital crafts in the industrialised world.
Our family-run team is well-versed in the history of sheet metal fabrication, and we’re also extremely knowledgeable about its modern-day and future uses.
So, let’s take a look at some of the lesser-known aspects of this fascinating industry.
Some of these little-known facts may appear to have been ‘fabricated’ … but in fact they’re iron-clad truths!

1. The Eiffel Tower’s height depends on which season you measure it…

The world-famous Eiffel Tower in Paris is constructed from 7,000 tons of wrought iron – a type of iron that is hammered, rolled and worked.

Sheet metal fabrication was also used to assemble some of the supporting mechanisms of the iconic tower.

As you may remember from school lessons, metal expands when heat is applied to it, and the Gustav Eiffel’s Parisian masterpiece verifiably grows during the summer months. With the sun continually heating the metal, thermal expansion causes the tower to increase in height by up to 17cm in July and August.

Well, almost! This may sound like something a well-known thriller writer might use as a plot device in one of his novels, but this obscure story is actually based on fact – not fiction.

Interestingly, a drawing in one of Leonardo Da Vinci’s sketchbooks shows the first instance of what would later become a rolling mill.

Da Vinci’s diagram is believed to date back to 1485 – and parts of his original design are still used in the sheet metal fabrication industry today.

3. Sheet metal fabrication has a prominent place in history

Henry Ford famously used assembly line technology to great advantage in the early years of the 20th century, and his Ford factories ushered in the mass production of vehicles. But it was actually entrepreneur Ransom Eli Olds that came up with the assembly line concept in 1901.

Sheet metal fabrication became much more widespread as the 19th century drew to a close, with workers increasingly using sheet metal rolling machines to flatten metal and press brakes to shape it.

So, advancements in the sheet metal fabrication industry during the 19th century directly contributed to the speed with which pioneering industrialist Ford could later assemble his millions of cars and help create the modern world.

4. Metal can be recycled almost indefinitely

Metals have been highly prized by civilisations throughout history for a variety of reasons – and they have two main advantages over other substances used by humans.

Firstly, they’re incredibly durable, and most metals can also be continually recycled without damaging their inherent properties.

The most recycled material on Earth is steel, while other common metals such as tin, lead, copper and especially aluminium are now recycled over and over again.

It has been estimated that 200 billion drinks cans are consumed across the globe every year, which in most developed countries are repeatedly recycled.

The steel sector is actually the second largest industry in the world, after oil and gas production.

Turnover in the global steel industry is approximately £2.5 trillion a year, and continues to grow at a steady rate.

Steel’s main uses are in the construction of buildings, roads, railways, housing, other major infrastructure projects and appliances.

Figures show that the production and use of steel rises in line with population levels and global development, which means that investment in the steel industry is seen by experts as a safe, long-term bet.

Yorkshire Laser has been operating to the highest of professional standards for over 25 years. We respect the history of sheet metal fabrication, and we also recognise that production methods and technologies are always evolving and advancing.

To this end, we have continually invested in the latest technologies, software and hardware in order to enable our business to meet the needs of a variety of clients. We consider no job too large or too small and pride ourselves on producing the finished product for you or your business at a competitive price and in good time.

We are also happy to offer you consultation, should you require any advice regarding any of the projects that you may have in mind.

Please contact our friendly team on 01924 220 236 if you require any further information.