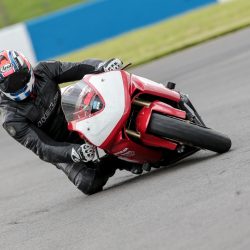 As MD of Yorkshire Laser Fabrications, Matt Orford is used to engines – just not normally two wheeled.  He shares his passion for motor cycle racing with Yorkshire Post business readers and customers.

My passion for bikes started as an eight year old when my dad, Garnett bought me my first trials bike. It was an old Yamaha TY80. I was hooked instantly.

My real, enthusiasm got off to a stalled start. Although I passed my driving test at 17 bikes were relegated to the back of the garage until I was 28.  I lacked time and money to enjoy them. Then I took a direct access course with an instructor in Doncaster called Bernie Macey.

Getting through the observation skills was a struggle because I didn’t know where I was going in Doncaster, but I was actually very good at controlling the bike and aced the U turn first time every time. That and luck saw me through the test because I was given one of only four routes around town that I actually knew. Two others on the same test weren’t as lucky despite being far better bikers than me.

After that there was no stopping me. I got myself a CBR600 and thought I was King of the Road, for six weeks until I smashed it up big style. I learnt the hard and painful way how not to drive.
Determined not to make the same mistake twice I joined the AIM, York branch who meet at the Squires Café near my Sherburn in Elmet home.

Every Saturday after that I could be found biking round the roads aiming for my advanced skills test with an off duty motor biker in tow. I learnt a lot from him primarily about observational skills and how to use them to keep yourself and other rod users safe. Their level of skill is amazing and passing this test was the best thing that I ever did. It has certainly saved my neck since on more than once occasion. It has also contributed to making me a better driver.

Having that qualification gave me the confidence to take to the European open roads.  I set off across France, Germany and closer to home Scotland where I have enjoyed some of the best biking ever, even if it is the wettest.

As I settled down and started a family spectating road racing became a big passion.  I made regular trips to Ireland, the Isle of Man and further afield to take in some of the most awe inspiring road racing at first hand.

Never one to stand still as track racing became more popular and easily accessible I turned to that as a new ambition. Sadly, it’s fiendishly expensive so I had to find an economical way of pursuing my latest hobby or risk upsetting my already long suffering, but patient wife.

The bandit racing series came to my salvation. It’s organised by formula pro stocks. I joined in at the end of last season and loved it. It’s incredible fun with great people to race. All I need now for next season is a very patient wife, new bike and luck that my aging body will hold out!