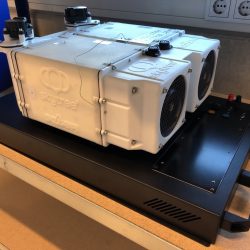 WHEN an international start up wanted to box up a cutting-edge carbon capture system they turned to Yorkshire Laser Fabrication for help.

The Normanton based company manufactured and suggested design improvements to metal boxes that are being used as prototypes for Direct Air Capture (DAC) being trialed in the automotive industry.

Yorkshire Laser, which has a 30 plus year track record of making boxes and brackets for the automotive and offshore industries was approached by Dutch based start up Skytree to make the prototype base plates that will be tested in vehicles.

Michael Jones, an engineer for Skytree explained: “Our system adsorbs CO2 in cars. By reducing the amount of CO2 in the car we can improve the cabin air quality for passengers and in turn reduce the load on the HVAC system.

“We’re in the trial stage and wanted a realistic compact box to hold the system.

“I have worked with Yorkshire Laser before. They are quick, reliable and their work is always to a high standard. The team also add value by suggesting design modifications which enhance the product,” he added.

The technology is planned to be demonstrated at automotive manufacturers around the world.

Originally used by the European Space Agency (ESA) and inspired by technology used by astronauts to re-cycle air they exhaled into space capsules, Skytree is looking to commercialise the system and make it more accessible for everyday use.

Matt Orford, MD of Yorkshire Laser said: “Our core business is making boxes for critical industries and new carbon capture technologies are a perfect fit. Hopefully it will lead to bigger things.”